Pembrey Country Park wasn’t always the magnificent parkland that you see today, previously it was the site of Pembrey’s Royal ordnance factory. The isolated sand dunes of Pembrey Burrows provided the ideal conditions for the dangerous occupation of the manufacture of explosives! The sand dunes not only provided an effective screen but also minimized any possible damage in the event of an explosion. It is hardly surprising therefore, that the area attracted the producer of gun powder and dynamite as early as 1881. 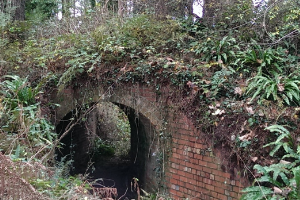 Pembrey was in fact one of 200 factories producing munitions that sprung up during the First World War. In common with most it was run down rapidly as soon as the war ended, eventually closing in the 1920s. During the 1930s the central administration building was used as a convalescent home and rehabilitation centre for the children of unemployed miners. As the second world war approached, the factory was re-opened and largely rebuilt under the name of the ‘Royal Ordnance Factory’. 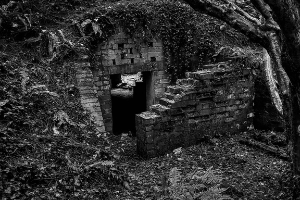 In the 1970s the local authority (Llanelli Borough Council) took over the factory site and began the arduous task of transforming the area into the beautiful parkland and coastal facility that you see today. More recently in 1996, Carmarthenshire County Council was established and has continued the commitment to provide locals and visitors with one of Wales’ Finest all year round parkland attractions.

To find out more and to visit the WW1 tunnels and WW2 please come to the visitor centre where we can provide you with more information. We also have information panels placed around the park. 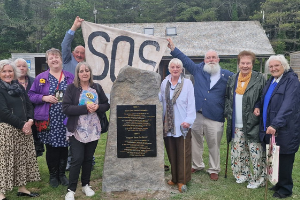 How did the beach & park become what it is today?

There is so much history about how Cefn Sidan Beach and Pembrey Country Park became what it is today.

In 1969 the mothers, grandmothers and daughters of Pembrey and Burry Port stood on the front line of a battle against the Ministry of Defence. It was a battle to stop the quiet sands of Cefn Sidan from being transformed into a major weapons testing site. And whilst the men of the area went to work, it was up to the women to defend the battle lines. Mum's Army is the story of how the women of Carmarthenshire took their fight to the Ministry of Defence.

Listen to the full story HERE 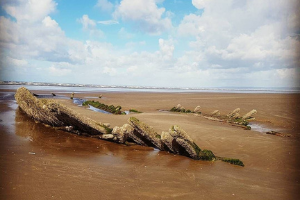 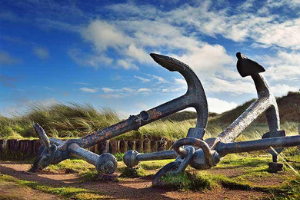 Cefn Sidan is the final resting place to a number of shipwrecks dating back to 1668. Evidence of the vast volume of sea traffic which passed along our shores can be seen protruding from its sands towards the northern end of the beach. A walk of around 10 miles would have to be taken to see them all. Anchors displayed at the main beach entrance are medallions of Cefn Sidans maritime history. Leaflets are available at our visitor centre.

These anchors were found near the low water mark on Cefn Sidan within 200 metres of each other. Their chains were found to be running at 45 degrees to the shore, so we can assume they are heavyweight or “Bower” anchors of a vessel which had been in extreme difficulty, their weight signifying a craft of at least 1,000 tons.

The History of the Royal Ordnance Factory, Pembrey

The sand dunes not only provided an effective screen but also minimised any possible damage in the event of an explosion.
It is hardly surprising therefore, that the area attracted the producers of gun powder as early as 1882. Dynamite & TNT were produced later when the factory was known as the National Explosive Factory, later The Nobel Explosive Company, & during WWII as the Royal Ordinance Factory, at its peak there were 6,000 people employed, mostly Women.

It was however, 1914 before the Royal Ordnance Factory became developed on a large scale. By 1914 the Nobel Explosive Company Ltd of Glasgow, who originally intended to produce industrial explosives, agreed with the Secretary of State for War to erect and manage a Trinitrotoluene (TNT) factory at Pembrey. It was agreed that the state should bear the entire cost of the plant, which would then remain Government property after the war, with Messrs Nobel being retained as agents for administration.

Pembrey was in fact one of over 200 factories producing munitions that sprang up during the First World War. In common with most, it was run down rapidly as soon as the war ended, eventually closing in the 1920s. During the 1930s the Central Administration building was used as a convalescent home and rehabilitation centre for the children of unemployed miners to produce ‘carbon black’ which is used in the manufacture of printers ink.

As the Second World War approached the factory was re-opened and largely rebuilt under the name of the 'Royal Ordnance Factory. The factory buildings were carefully laid out over some 200 hectares of sand dunes with the central office, police barracks, canteen, surgery, library and administrative buildings being grouped together near the entrance of the factory.  The nitration buildings, magazines and other danger spots were scattered among sand dunes a safe distance away. Only a few of these structures now remain. The site’s coastal location meant that there was an economical building material readily available in the form of sand.

In addition to the area’s natural dunes, large quantities of sand were used to form artificial mounds and underground bunkers. These not only provided a degree of camouflage but also protection against attach of explosion within the factory. Many of these remain and have been incorporated into the landform during the reclamation of site. The layout of the site had been given careful consideration with raw material stores, acid plants and nitration buildings laid out in a progressive order enabling an effective flow of materials along the factory’s railway system. Traces of the tracks are still visible today, particularly in front of the Adventure Play Area. The factory was entirely self-sufficient in terms of services, having its own plant and machinery to produce electricity.

Water was obtained from two small rivers five miles away. Intake ponds were constructed, from which water was carried in a fifteen inch main to a low level pond in the factory where it was chemically treated, filtered and pumped to high level storage tanks, to be carried by mains throughout the site. Later a number of well points were sunk within the factory. Steam was generated at four boiler stations having 33 boilers, capable of producing 5,000,000 lbs. of steam per day. Electric light and power were generated at the factory’s power station where seven generators with a total capacity of 4,300 kw were installed.

Access to the site was from the main A484 Carmarthen to Swansea Trunk Road along a private road. Most of the materials and labour came by train, with the site connected to the main Paddington – Fishguard line, some two kilometres away by two branch lines.

The product of the processes carried out at the factory were, not surprisingly put to war-like users. Royal Ordnance Factory Pembrey was in fact the Country’s largest producer of TNT. Ammonium Nitrate and Tetryl. During 1942 when peak production was reached some 700 tons of TNT., 1,000 tons of ammonium nitrate and 40 tons of Tetryl were produced every week. In more peaceful times TNT was carefully removed from superfluous ammunitions, while Ammonium Nitrate was produced for use as agricultural fertiliser.

Waste TNT. was burnt on isolated patches of sand, although some underwent controlled burning. Production continued after the Second World War at a low level except for a sharp upturn in the early 1950’s at the time of the Korean War. The factory was largely concerned in the late fifties with the breaking down of obsolete or superfluous bombs and shells. Gradually the work force was allowed to run down from a peak of 3000 in 1942 to under 400 in 1961.

The closure of the factory was formally announced in the House of Commons in April 1962, upon recommendation of the Royal Ordnance Factory Review.

The factory was finally closed in March 1965